A Japanese IT company has launched an ‘electronic menu’ for whisky to help drinkers identify drams that are to their liking based on their preferred flavours.

RecoMentor, a new application newly developed by Tokyo based Asian Frontier Co, is introducing a new way to order whisky. Designed with an easy and approachable user interface, the application aims to help people with no whisky knowledge to find whisky that suits their palates.

The application serves as an electronic menu that allows consumers to choose their whisky based on flavours they like. Via functions such as Flavour Chart, Flavour Tag and Flavour Drum, consumers are guided through the flavour elements that are derived from the distillation process, as well as the aroma categorisation in accordance with the standards of Aromaster. The Flavour Tag especially may come in handy for consumers as they can choose their favourites out of a selection of 70 individual flavours.

Based on a preferred flavour profile, users can further expand their search to other whisky labels that have a similar style. 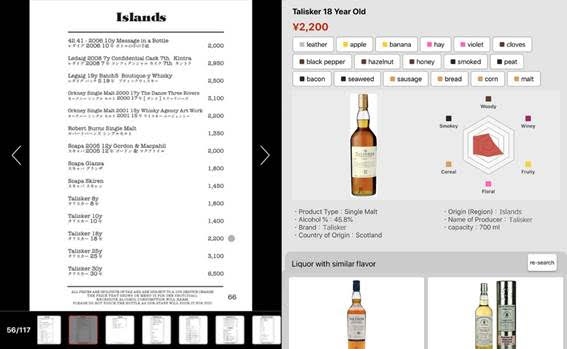 Currently, there are more than 1,500 entries on the server. All the flavour data is determined by the whisky manufacturing process and actual tasting notes given by local whisky experts.

The professional version of the application has even been adopted by some bars and shops in Japan as it provides not only an approachable solution for customers, but it also can link with the stock inventory system. The interface is available in three languages, Japanese, English and Traditional Chinese.

In the pipeline, the company is planning to expand the system to other drinks, for example, sake. In the meantime, it is also developing a taste log for users to record their tasting notes and share with friends on social media.

Cork producer Masilva has launched a new technology called Neotech, which is capable of eradicating detectable TCA from…